I periodically upgrade the covers in my collection with ones that are in better condition, show a more interesting usage, have historical context or simply have more eye appeal. Case in point is the cover shown here. My previous example of this stamp on cover had a roughly opened edge and a 1978 usage, despite the stamp being issued in 1965 (after the war ended in 1975, the military used reserve stocks of stamps until they were exhausted). 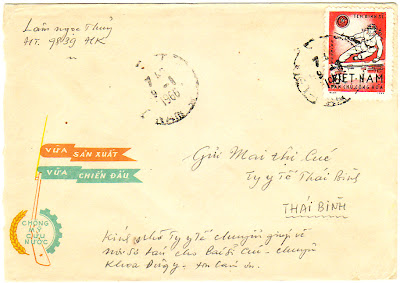 In addition to the contemporary postmark from 1966 and the military return address, the cachet appealed to me as I had not seen in before.

I reached out to my friend, Vinh Nguyen, who quickly translated the cover's details. The cachet reads, Vừa sản xuất vừa chiến đấu, that translates as "Produce While Fighting". The central circular logo bears the phrase, chống mỹ cứu nước meaning, "Fight the US aggressors to safeguard our country."

The hand-written text at the bottom reads, "Medical department, please forward to Doctor Cúc, traditional medicine, to where here department is temporarily evacuated."


All in all an interesting cover that I am happy to add to my collection.
Posted by Unknown at 6:42 PM No comments: