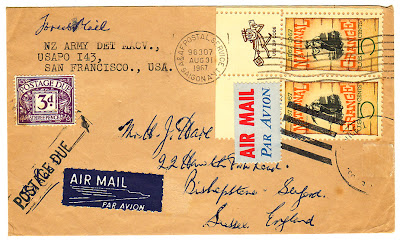 In May 1965, New Zealand announced its decision to deploy a combat force to Vietnam including a 105-mm howitzer battery, replacing an engineer platoon and surgical team deployed the previous year. The unit was attached to the US 173rd Airborne Brigade under MACV command, with the primary mission of supporting Australian forces in Phuoc Tuy Province.

In November, 1967, New Zealand and Australian forces entered a working arrangement to reimburse the United States military for services and support including base camp construction, transportation within Vietnam and military postal facilities that included a closed pouch system for all personal and official mail.

The illustrated cover, sent via the US APO postal service was sent to England, under-franked with 10-cents postage and assessed 3-pence postage due.
The sender was one of 18 members of the New Zealand Army Detachment headquartered in Saigon. Total in-country strength of New Zealand forces at this time was 534.
The small number of personnel in Vietnam makes mail sent by NZ units less plentiful than that of their Australian and Korean counterparts. It should also be somewhat less plentiful than mail from Thai allied forces. I have not found that to the the case, and it is reflected in the significantly higher market prices for Thai material related to the Vietnam War.
Strength of Military Assistance Forces in Vietnam in 1967 (US Department of the Army):
Australia: 6,818
Korea: 47,829
New Zealand: 534
Thailand: 6,005
Philippines: 2,020
Republic of China: 31
Spain: 13
Posted by Unknown at 11:02 AM No comments: