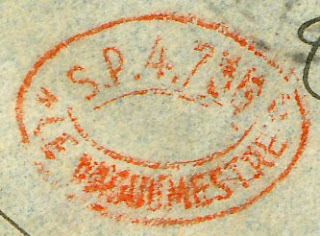 This cover has a neat oval 4-digit Secteur Postal 4736 handstamp and would have made a nice inclusion in the presentation I gave at NAPEX last year. This is an example of a transitional marking with French text but that includes a 4-digit Vietnamese Khu Buu Chinh zone number. Note the use of the KBC abbreviation in the address line. The recipient appears to have been at KBC 3011, the Vietnamese Air Force general headquarters in Tan Son Nhut. 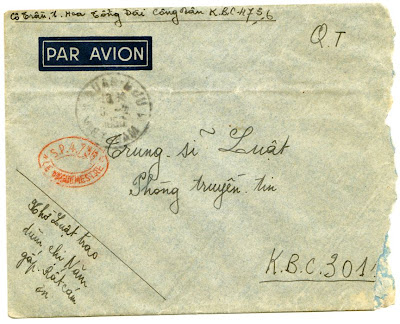 Speaking of NAPEX, I am looking forward to seeing everyone at the Society of Indo-china Philatelists annual meeting in McLean, VA next Saturday.

Posted by Unknown at 2:53 PM No comments:

In January 2009, I illustrated two covers sent by Le Minh Dao. I was fortunate to acquire another cover (two-thirds of one at any rate) sent by Le Minh Dao from KBC 4027, the National Military Academy in Dalat, to Le Hoang Minh via the Quan-Buu military post. The postmark year date is illegible, but I am going to guess it is November 1956. The blue KBC cachet is unusual in both its color and size. 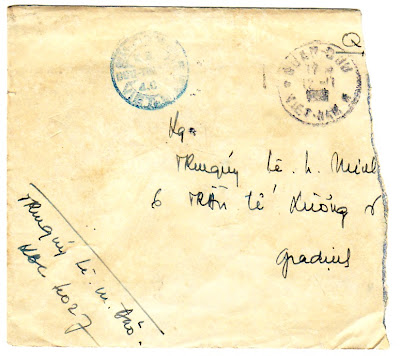 The envelope contained several small portrait photos. Can anyone confirm if these depict Le Minh Dao as a young man?

Below, Le Minh Dao is shown in this photo together with Ho tan Phat at the opening ceremony of the Cho Gao Electricity company. 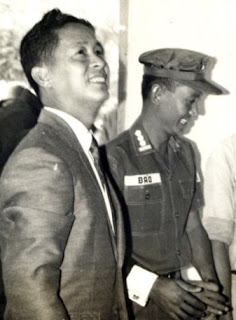 The formation of the Royal Australian Navy Helicopter Flight Vietnam was announced in July 1967 to be integrated with the United States Army 135th Assault Helicopter Company (AHC). Based in Vung Tau, the initial flight consisted of eight airmen flying Iroquois helicopters, and their requisite staff. 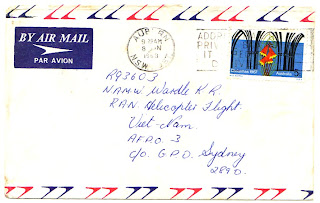 On January 12, 1968, just four days after the postmark date, the cover's recipient, Keith Wardle, was injured when his gunship was forced down in the jungle. The wreck caught fire, detonating ammunition and rockets. Wardle was seriously wounded and evacuated to Australia.
RAN pilots ceased flying June 8, 1971 as the United States was disengaging from Vietnam.
Details about the RAN Navy Helicopter flight may be found on this excellent site: http://www.navy.gov.au/RAN_Helicopter_Flight_Vietnam
Posted by Unknown at 11:02 PM No comments:

I pick up interesting covers when I come across them, realizing I may not understand all of their aspects until later. 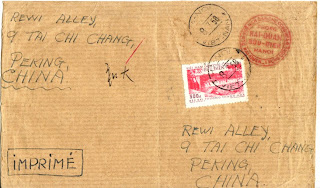 An example is the depicted cover that bears a nice "Hai Quan" hand stamp and is postmarked Hanoi, 1958. Thinking this might potentially be a North Vietnamese naval military cover, I put in a bid. If nothing else, the fact that it was sent to China was interesting.

As it turns out, there are no accent marks on the term Hai Quan in the hand stamp, so it translates as "customs organization" as opposed to Hải Quân, meaning "navy" 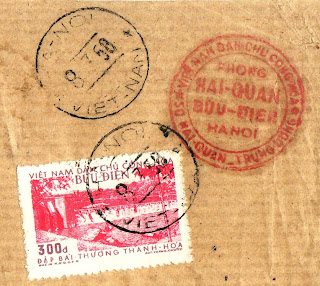 The sender (and recipient) however, held a surprise for me. Rewi Alley, a native of New Zealand, was a writer, educator and member of the Chinese Communist Party. It isn't clear what he was doing in Vietnam in 1958, but it could have been related to his works published in 1956, Spring in Vietnam, a Diary of a Journey and Buffalo Boys of Viet-Nam. Alley is credited with coining the term "gung ho".

So, it turned out to a be a worthwhile cover after all (the stamp isn't bad either...)
Posted by Unknown at 10:43 PM No comments: 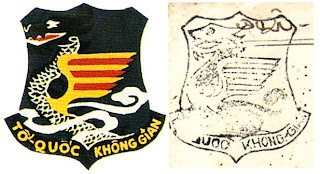 I enjoy collecting insignia on Vietnam War military covers, so was pleased to recently find one from the Vietnamese Air Force (VNAF). The handstamp on the cover, shown at right, was obviously applied by hand from a rubber stamp - once on the front and three times on the reverse of the envelope. I'd love to find an example of a pre-printed, full-color insignia like the one on the left, but I'll take what I can get (this is the first example of a VNAF insignia I've seen after 12 years of collecting this material). 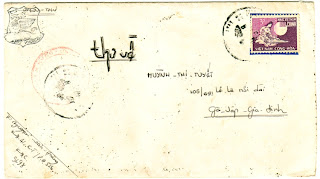 The cover was sent from KBC 3198 that served the Vietnamese 1st Air Division in Da Nang. From the return address, the sender was with the 41st Tactical Wing (Khong Doan Chien Thuat), 512th Flying Squadron. This is the first reference I've seen to this squadron.

The postmark is illegible, but the cover is probably from 1966 or 1967 based on the stamp.

Posted by Unknown at 4:56 PM No comments: