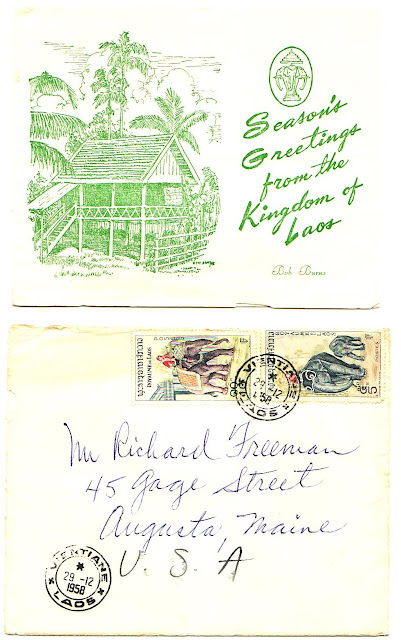 Seasons Greetings from the Kingdom of Laos....Bob Burns was the Intelligence Officer attached to United States Information Service in Vientiane, Laos when this card was mailed in 1958.

Best regards to everyone for happy holidays this year!
Posted by Unknown at 7:31 AM No comments: 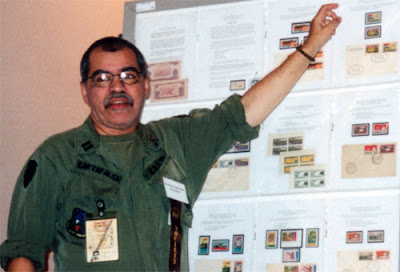 In August, 2000 I attended the APS Stampshow in Rhode Island. I had the good fortune of meeting Joe in front of his Vietnam Military Mail exhibit. I had started collecting this material a couple years earlier, but was finding it difficult to understand what I had. Joe spent a lot of time with me that day, walking me through his exhibit, identifying and commenting on the covers I had brought along, and introducing me to dealers at the show who carried Vietnam material.

Over the subsequent years, Joe continued to build my enthusiasm and knowledge in the military mail of Vietnam, and expanded my interest into revenues. We kept in touch via email and an occasional phone call, meeting up at NAPEX when his health allowed. We collaborated on a CD-ROM and talked about items we had found and articles we were writing. I caught up with him in Philadelphia one year to borrow books for an article I was writing, and of course to browse his stock.

Joe was a long-time member of the Society of Indo-china Philatelists, and a prolific contributor to philatelic publications, including three articles in the Congress Book.